Just Taking the Dog On A Walk…

Friday night, my daughter’s 19th birthday, and I am riding solo.  Mark is in Houston, spending the afternoon with birthday daughter before they go celebrate at Fleming’s.  Martha went home from school with a friend and will not be home until tomorrow.  I ate dinner early (well, early for Paris) and decided to show Sawyer some Paris streets he hadn’t seen before.  He was excited at the prospect.

Usually we walk straight up to the Champs-Elysees and then turn and walk along it, with all the tourists and a few Parisians riding their bikes to and from work.  I love the boxy trees and the Arc and the and hustle and bustle.  Tonight, however, we crossed the Champs and walked to the river. 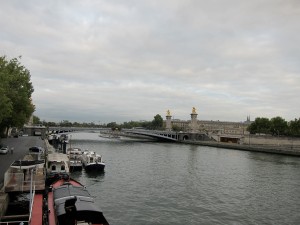 Sawyer's first view of the Seine. He was underwhelmed.

After crossing the river we walked along a nice park area.  We wish we had something like this in our neighborhood.

When we reached the end of this quai we were at the Pont d’Alma, the bridge we would cross back over on.  As you can see, this bridge is pretty darn close to that crazy Eiffel Tower.  Too bad it was still kind of early – it would have been a prettier picture if it had been lit. 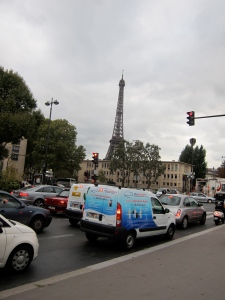 This traffic looks a lot like Houston's but without Suburbans.

At this point Sawyer is telling me to put down the damn camera and get out of the street.

So, if you have been following my narration closely, you know that we are now walking back toward home, but on a different street.  This street is called Rue Montaigne, and it is one high dollar street.  I just snapped pics as we walked on by- it really is literally one designer boutique after another. 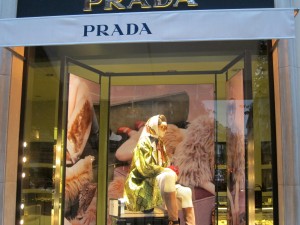 I don't even know where to begin with this window. 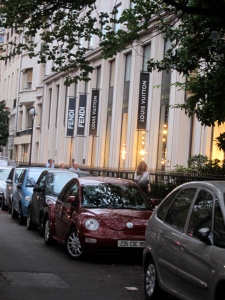 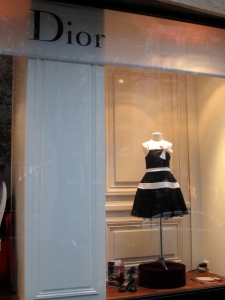 This pic actually took a long time to get because that mannequin spun very s l o w l y. 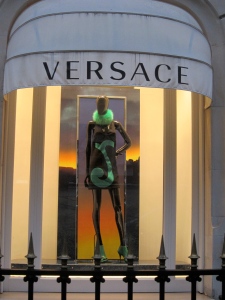 This would have to be a FURragamo, wouldn't it?

Cutest children's boutique window. I may have to go back and get a better picture so you can appreciate it. Darling.

As we got back to the Champs, there was an invitation-only art event of some type in this lovely building.  Sawyer and I were missing the required orange envelope, but we enjoyed watching the more fortunate.

So we crossed back over the Champs Elysees and headed home again down the street that is our new equivalent of Memorial Drive.  Isn’t  this a pretty florist?  I haven’t indulged yet, but it’s inevitable.

This is our home metro stop, which means we have come to the conclusion of our designer showcase. 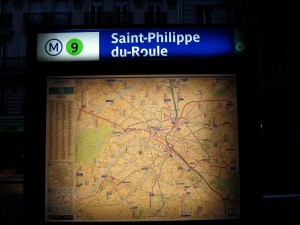 Sequel: Le chien and I  did a similar walk tonight, Saturday, when we found ourselves once again looking at each other with nothing to do.  The light was a little prettier, so here are a few more.

This time we walked along the river instead of crossing it. 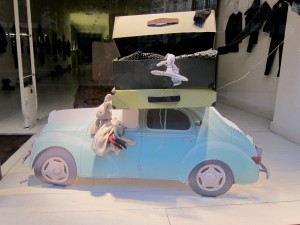 I don't know if this pic came out any better. It's a car with bunnies hanging out, and a suitcase coming open on top, with clothes flying out. These French people are really creative.

5 responses to “Just Taking the Dog On A Walk…”