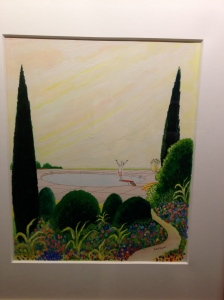 Last weekend Martha and I went to our first exhibition together.  All we knew about it was what we saw on the posters in the metro stations, which said it was a collection of cartoons and drawings of Paris  by a famous French artist named Sempe.  The exhibition was at “l’hotel de ville”, a lovely building completed in 1882 which is the city hall for Paris.

We were surprised to see quite a line of people waiting in front of the building, and I’m so glad we decided to wait, even though it turned out to be almost an hour, during which time rain began threatening and neither of us had an umbrella.

When we got inside I realized that I was familiar with this artist because of his extensive publication in the New Yorker magazine.  I grew up with the New Yorker, and it still holds a warm place in my heart and inspires my utmost admiration for anyone who can keep up with its weekly publication.  When I was a kid, the coffee tables and bedside tables were forever piled with colorful copies of this magazine.  I subscribed for a short time as an adult before being forced to wave the white flag and admit that I just wasn’t able to read them before the next one landed, as much as I wanted to believe I could.

With that background, imagine my surprise and delight to see an entire wall of his art and the New Yorker covers it created.  His first cover was in 1979, when the magazine cost “one dollar”.  His most recent cover on display bore a price of $6.50, but I can’t read the date on it. 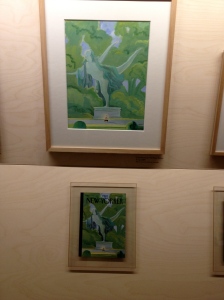 I think this one is the most recent.

The New Yorker material was only a small portion of the total exhibit, which was quite extensive.  Martha and I loved the other work, too.  Although we didn’t understand much of the humor, the art was enchanting.

I know the pictures aren’t that great- I was snapping furiously with my iphone, trying to get shots without bits of other visitors in them.  If you click on the photos, they actually look much better.

I’m curious- do any of you read the New Yorker?   If so, raise your hand and I”ll send you a high five.