Lost On The Way To Versailles

Last week I amused some Facebook friends with my note that I had gotten lost on my way to Versailles, but ended up at the Musee D’Orsay, so all had not been lost after all.  The RER train system truly can be confusing, even for two relatively high-functioning women, one of whom has lived here for over a year.  We had gone quite out of our way before realizing that the famous chateau we sought was NOT at the end of our route.  We jumped off and changed platforms and back-tracked as far as the museum, at which point we realized we were going to be so late to Versailles that we would have missed half of our tour.  So we aborted and opted for the Musee D’Orsay, which I had planned to visit soon anyway.  I love the story of this museum, which occupies a former train station that was slated to be torn down before someone came to his senses and turned it into a lovely museum.  Unfortunately, they don’t want you to take photos at the Musee D’Orsay, (which is strange because the Louvre doesn’t have the same prohibition) but I did take a few of the newly renovated cafe and of the incredibly gorgeous clock there.

Not too shabby for a Plan B, eh? I love that museum, and also love that it’s not really big and that I can walk there easily from my apartment.

Yesterday a sweet friend from home brought me another mother lode of treats, including granola bars, assorted candy (because you know there isn’t any decent chocolate in France, right?), pecans,  fresh jalapenos (yea!), and an entire cooked brisket!  What a good friend is she???? 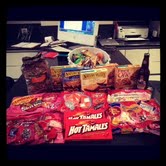 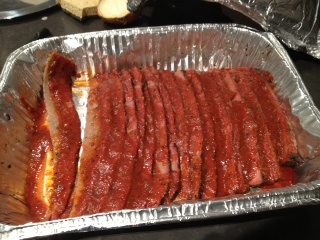 As you can see, the French do not ask or care at all about food brought into the country, which is a darned good thing for my friend, and for me!

We’re off to do a bit of Paris exploring and lunching before the rain begins.

Thanks for stopping by!

6 responses to “Lost On The Way To Versailles”