This week has been more quiet but just as busy as last week with the Spring Breakers.  Well, it’s only the end of Tuesday, but so far, that has been the case.  I want to make the most of my time with my good friend, so we have been on the move.

The last car heading to the airport had barely pulled away from the apartment on Sunday morning when we headed out to Bastille Market.  I had never been there and was excited to see the largest outdoor market in Paris, and the one where David Lebovitz shops ( I looked for him but he wasn’t there).  It was indeed a gi-normous market and we had a great time going up and down all of the aisles and making purchases for our coming week. 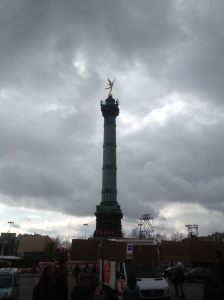 This monument stands in the Place de la Bastille where the prison stormed by the French people in July of 1789 stood. The market is just off the Place.

We admired these babies but passed.

I could survive quite happily here on bread, butter, and eggs. 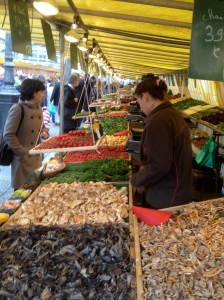 When we got back home, our granny cart was full.  Here was our bounty. 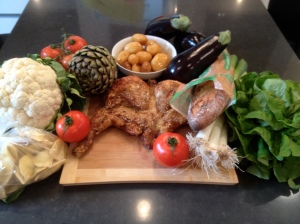 The chicken in the middle was roasted crispy and had honey and sesame seeds on the skin.  The nice lady gave us the roasted potatoes in the bowl.  She must have thought we looked in need of fattening up.  Thanks, nice chicken lady.

It was accompanied by its friend, stuffed artichoke. 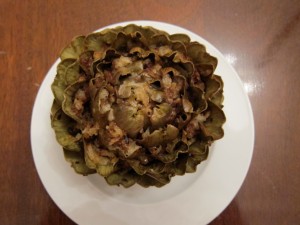 We have done more than cook, however.

We went to the oldest department store in the world, Le Bon Marche. I had been there only once while on a walking tour, and this time we really looked at all the departments and marveled at the shoes, bags, and clothes that we could never afford.

I love this display- obviously done for Fashion Week.

The Bon Marche is also known for its incredible food market, called La Grande Epicerie.  It was huge, and very, very pretty.  The Easter candy selection was much nicer than where I usually buy it, which is Walgreens.  I thought you might like to see their “United States and Canada” shelf.  No wonder they think we eat junk and are all obese!  Strawberry and regular marshmallow fluff?  Assorted spray cheeses?  Boxed cheesecake?

And how have I ever managed to live without Shake and Pour Bisquick?

On the way home we thought it meet and right to stop at Les Deux Magots for a glass of wine.  We toasted Hemingway and each other.  It was a very good day.

Now go have some Shake N Pour Bisquick with Strawberry Marshmallow Fluff and be grateful that you live in the land of gourmands.