Move Over, Swansons, Picard Is In Town 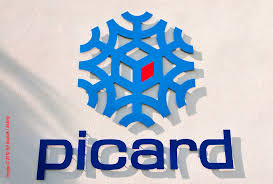 I have a confession to make.  I can be a snob about some things.  Purses and shoes come to mind.  Nothing that rises to the Paris level, of course.  I’m not talking Hermes or Louboutin, by any stretch.   But I definitely would prefer to have a smaller number of quality shoes and bags that are comfortable and long-lasting than a closet full of cheaper ones that aren’t.  I am also a moderate food snob, and have pretty much eschewed pre-prepared, packaged, processed foods ever since I emerged from the years of small children craziness and reclaimed some higher cerebral function.  Frozen foods are definitely in the category of That Which I Do Not Buy.  Other than frozen chopped spinach and Rhodes rolls (required for Pioneer Woman’s incredible Rosemary Rolls),  my freezer is pretty devoid of frozen food that I haven’t prepared and packaged myself.

These stores, with their blue snowflakes, are almost as common as Starbucks in Paris.  Except in my neighborhood.

Picard seems to be an institution in France.  I have heard over and over that French women  do not make desserts or appetizers for their dinner parties- they get them from Picard and then serve them on a nice dish to their appreciative guests.  I know it might seem odd that France,  known for its haute cuisine and fancy pastries, would be the home of a thriving frozen food chain, but it is.

I, myself, have not whole-heartedly embraced the Picard offerings, primarily because there isn’t a store within an easy walk of my apartment, and because my freezer is  only slightly larger than my microwave.  However, I am fascinated with the stores and what they have achieved with frozen food.

Picard offers a wide variety of uncooked meats, fish, vegetables, and desserts, as well as prepared entrees, appetizers, soups, and desserts.  While everything is obviously not seasonal, they do change their inventory in order to rotate seasonal items in and out.  All of their food is preservative-free, and they offer low-salt products for the sodium- adverse.  A trip to Picard can  be an endless source of entertainment for me, even if I am not buying a thing.

The stores are fairly small and sterile, similar to the frozen food sections of our grocery stores, but with rows and rows of horizontal freezers.

At this store in the 16th, one enters from the street and immediately takes an escalator down into the frozen depths .

Now let your eyes adjust to the fluorescent lights and you will be fine.

OK- here is one of my favorite frozen things here.  I have seen them in other grocery stores, too, and I think it’s brilliant.  Perhaps you people who shop at fancy stores like Trader Joe’s already know about this, but pas moi.

Isn’t that the coolest?  Little tiny cartons of  frozen herbs, which allow  you to sprinkle out as much or as little as you need.  While probably not as flavorful as fresh, they are definitely preferable to dried, and you avoid the dreaded waste issue.  How many bags of liquid green , formerly known as parsley, have I tossed?  I don’t want to know.  I think this is brilliant.

We all know that the French love their sauces, and here they are in frozen form.  AND I spy some chicken broth in there, which is the only alternative  to powdered broth here.  Need to get me some of that for sure.

Another thing I love is that Picard freezes food in little nuggets, so that you can cook only as much as you want.  The sauces would be in nuggets, as would spinach, and these awesome soups.  Wouldn’t you like to be able to cook a few nuggets of cauliflower soup for lunch?  Yum.

Speaking of nuggets, they have them, too.  But somehow “nuggets de poulet” sounds much nicer than “chicken nuggets”.   I’m thinking that French children probably do not eat nearly as many of these as our children do (or did, back when mine were little- perhaps we have evolved since then).  One can hope.

I am pretty sure I had these macarons at a school function and they were pretty darned good.

Of course there are many varieties of foie gras.

And I suppose I could keep one of these on hand for an unexpected Mexican craving.  Oh second thought, maybe not.

I’m sure you guys will let me know if I am just way behind the frozen food times, and this kind of thing is all over the U.S.  But I am just a simple Texas girl, you know, and I have not seen such things in freezers before.  I am also easily entertained/amazed/amused by food.  Even the frozen variety, apparently.

I just realized I didn’t get pics of any of the amazing appetizers or desserts.  Perhaps that will be food for another post.

13 responses to “Move Over, Swansons, Picard Is In Town”