I know what you’re thinking.  Another fashion show, Kate?  Really?  Yes!  Except that this one would be perfect for ….Cocoa Chanel!  Because this fashion show was part of the Salon du Chocolat and all the fashion was crafted from chocolate!

OK.  That was a really chirpy intro, with three exclamation points and all.  But it kind of goes downhill from here.  You have been warned.

If you are a devoted reader of Mais Oui Paris, you surely recall that I attended the Salon du Chocolat last year and my post on it included  pictures of dresses on display.  I didn’t realize at the time that those dresses were actually modeled each day of the Salon in a real fashion show.  Having already “done” the Salon du Chocolat, I wasn’t really interested in returning until my friend at Out and About in Paris whipped us all up into a chocolate frenzy about the fashion shows.  I felt like I owed it to you all to return and capture the wonder of models in chocolate.  And so I took the 80 bus farther than I had ever taken it- to its terminus at Porte de Versailles, and joined the line of bobbing umbrellas slowly filing into the building.  Before I got there I witnessed this funny scene: a little girl trotting behind her distracted mother was horrified to watch her bag of chocolates empty on the wet sidewalk.  When Mom turned around in response to the shriek, she didn’t look too happy either. 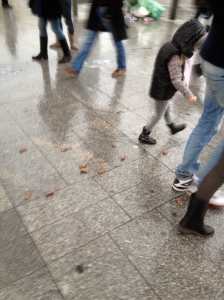 Anybody else thinking of Caddyshack?

It was really pouring by the time I joined the end of the line, which seemed to be moving at a snail’s pace.  When I finally approached the entrance I realized that all us were being fed into one (of about 5) doors, and further advancement revealed that the ticket booths were so close to the entrance that the lines were all converging into one wet, wiggling mass of humanity. 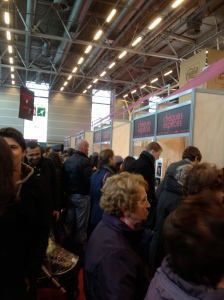 Yep, they all entered through one door.

Of course, all the Frenchies were effortlessly sensing how to cut into the ticket lines as they entered the building, which further slowed the process.  I was frustrated, but did my yoga breathing and thought about how lucky I was that I wasn’t pushing a stroller, as so many around me were.  Finally I was able to buy my ticket and enter the giant hall.  By this time it was 4:20, 40 minutes before the fashion show was to start, and almost 2 hours after I skipped out of my apartment with visions of chocolates and caramels dancing in my head.  I walked straight ahead to the area where the fashion show would happen, and found that another show of some type was just ending.  I hoped that perhaps the audience would empty their chairs and allow some of us who were pushing ourselves through the standing crowd to nab a seat, but that was wishful thinking.  Those people sat through 45 minutes of awards to the top chocolatiers (all in French, of course), which included a short interview with each one, followed by a reading of the judges’ comments , culminating in an official photograph of the smiling chocolate- maker with his award.  Even more surprising is that most of us who were standing as close to the stage as we could get (which required standing as close to each other as we could possibly get) also stayed for the entire awards ceremony.  Not only was it boring, it was hot.  I stood there with my coat draped over my arm, my tote bag (for umbrella and free chocolate) at my feet, my purse strapped across my chest, and my camera in hand.  Each time someone in front of us surrendered and pushed through us to escape the misery, the rest of us wedged ourselves in the additional space, desperately hoping for a viewing space to open up for the show.  Sadly for you, and for me, the space around me never opened up for a view.  The reason for this was primarily because I had the misfortune of standing behind The Biggest Man In France. 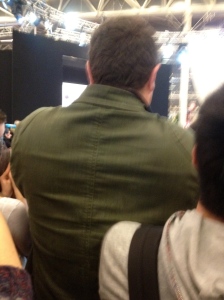 And his camera was huge, too.

Is it any wonder that I couldn’t get a single good shot?  I don’t know who that dude was, but I hope he has a rockin’ blog.  Or works for Vogue or something.  Because my iPhone camera and I were relegated to pictures like this: 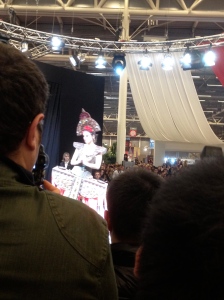 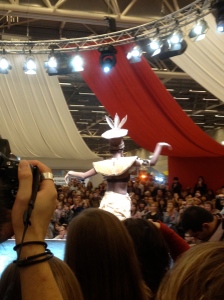 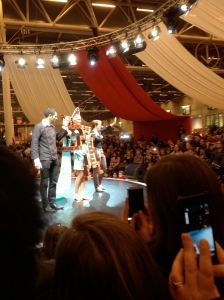 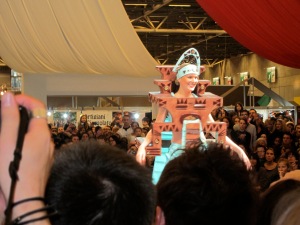 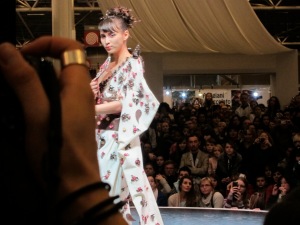 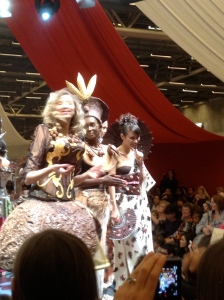 Pitiful, I know.  I am so sorry.  These two fashion shows have made me think I have to get some press credentials.  Either that or make very good friends with The Giant.  And I was miserable the whole time I was taking these terrible pictures, too.  I don’t think the guy standing behind me could have possibly been any closer, and I was praying that whatever was prodding me insistently back there was not part of his body.  Seriously.  The good news is that my friend was able to get some good pictures,(presumably without being violated in the process)  and you can see them here.

I guess I could have made this short and just sent you to her page at the beginning of this post, but I wanted you to know how hard I tried.  And remember that I don’t even like chocolate all that much.  When I was finally able to extricate myself from the man behind me, and push through all the people behind him, all I wanted was to get the hell out of that place.  But I made myself wander around a bit.  Soon the dresses were back on display, and I was able to really get a good look at them.  I think this one was my favorite. 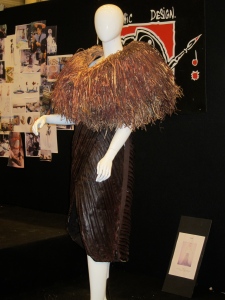 For those of you wondering how the chocolate creations were able to be worn, I’m sure they all had special linings on the inside, so that those hot bodies were not right up against the chocolate.  It’s a good thing, because as hot as it was in there, those models could have become very saucy indeed, had the dresses warmed up.

Thank you and good night.