I am awake early in Telluride, Colorado, watching the sun illuminate the golden aspens in total silence. I cannot bear to watch any more of the horrific footage of what happened in Las Vegas, so the television will remain mute. Perhaps there are new details this morning, but none of them will explain how a human being could commit such an atrocity. There will be more angry voices demanding changes in our ridiculous gun laws, but since the innocents at Sandy Hook were unable to make that happen, I have serious doubts about anything being done on that front. So for now I will honor the victims by sitting in silence and being thankful for another day of life, and for this beautiful fall morning.

Fall is always sooooo slow to arrive in central Texas. It seems as though the rest of the world is already knee deep in pumpkin baking and falling leaves and nubby sweaters before we even turn off our air conditioners. So it’s a special treat for me to be in Telluride this week, where the aspen trees are still clinging to their glowing leaves and the air is crisp enough for a light jacket and a fire in my fireplace (even if I do have the windows ajar).

I took a long walk on my first morning, to shake off the travel stiffness and acclimate to the altitude. 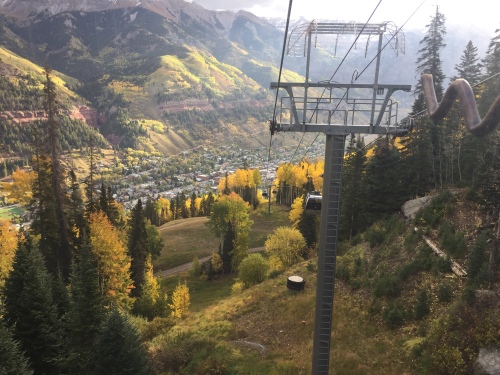 First I enjoyed this amazing ride down the mountain to the town. I don’t think I had ever seen it so lovely.

This trail goes right into a forest and up to a waterfall. It was early and I met very few other walkers, although on my way down I passed several crazies jogging up this rocky path. I wondered what terrible thing they had done to deserve such a punishment. 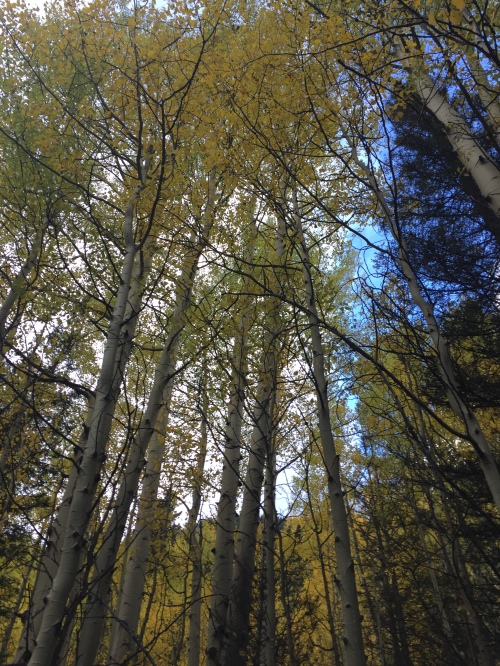 Yesterday brought a change in the weather. The clouds gathered and sat atop the mountain village like a wooly cap.

Finally the clouds began to drop a light mix of snow and sleet, and continued to do so for several hours. This Texas girl was beyond delighted.

I stayed inside most of the day, captivated by the unexpected drama outside my window, and horrified by the inconceivable drama on the television screen.  I also finished reading M.F.K. Fisher’s , The Gastronomical Me. Fisher is perhaps the most famous food writer ever, is frequently referenced by current writers, and I had never read any of her work. I was happily surprised that these essays, written about her life from the 1920’s to 1941, were about so much more than the food she ate. They were about the people she shared food with and how she felt during those meals, and how we all hunger for so much more than what is on our plates.

The bitter topping on yesterday’s tragic news story was the death of Tom Petty.  I will never forget the night my college roommate and I took the bus from Reading to London to hear Tom Petty and the Heartbreakers at Wembly Stadium. We were horrified to realize that we didn’t have enough money to pay for our tube ride back to the center of London, where we were to catch the last bus back home. There was nothing to do but to get on the tube and throw ourselves on the mercy of the ticket attendant as we exited the underground. Turned out that attendant had no mercy for us AT ALL, and was probably about to throw us in the dungeon when a very nice man came to our rescue and paid for our freedom. Thank you, kind English gentleman, wherever you are. And rest in peace, Tom Petty.