I spent a lovely day last week wandering around the Belleville neighborhood, which felt like a world away from the eighth. Back in the mid-19th century, Baron Haussmann’s makeover of Paris left many slum residents homeless. Throngs of these displaced people fled to Belleville, and today the area is home to many working-class people of all ethnic backgrounds. This is the place to look for those exotic ingredients or spicy peppers, or for authentic ethnic restaurants. Belleville also offers beautiful vistas of Paris without the crowds and tacky souvenir shops surrounding Sacre Coeur.

My first stop was Parc de Belleville. This relatively new park (I think it was opened in 1988) is built into a hillside and is a series of shady paths traversing the hill and stairs going up and down. It was serene on that late morning, with only a few people occupying shady benches and a small group of sun-worshippers having lunch in an open yard.

The park was nestled right up against apartment buildings, whose residents no doubt enjoy the view as well as the prime picnic opportunities. 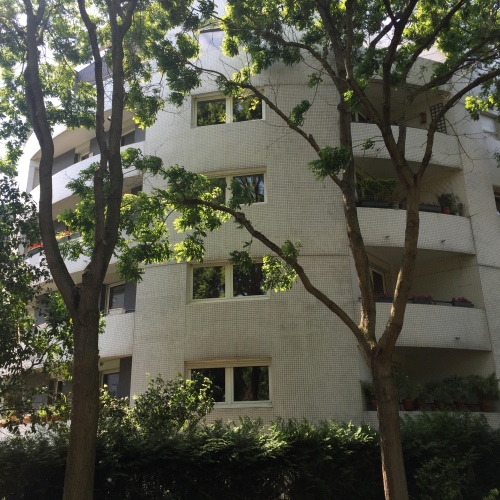 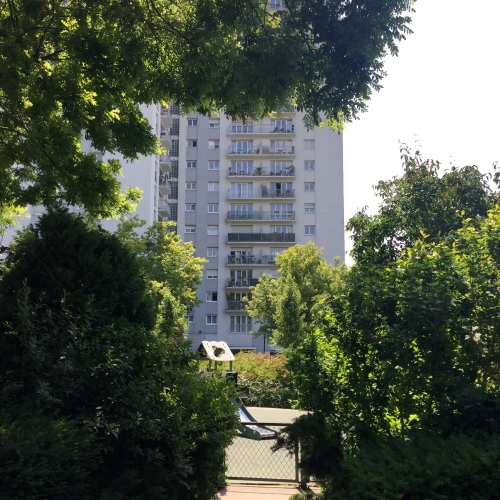 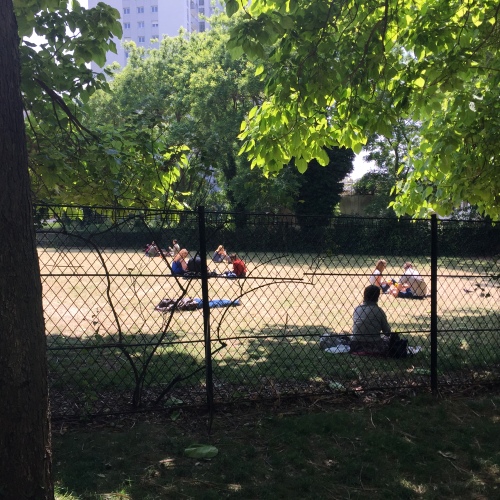 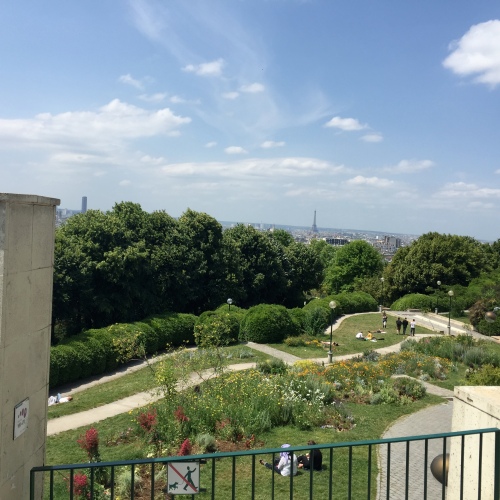 Just outside a park exit was this inviting little cafe with a shady terrace. 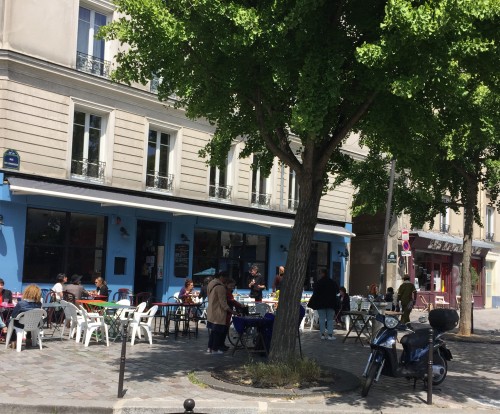 I took a seat at one of the colorful tables and ordered the cheese and tomato tart. 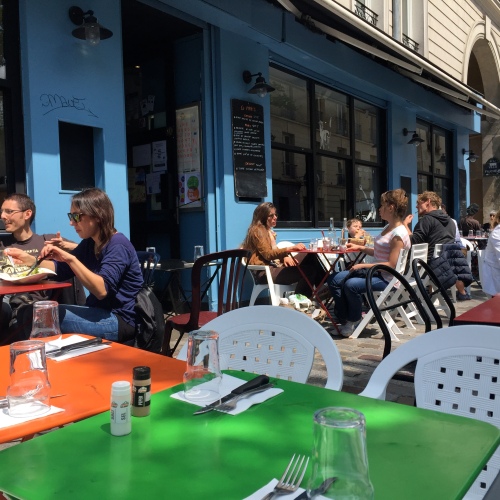 And then this happened. Don’t judge. I was climbing hills. I needed my strength.

Just across the street was this adorable building anchored by a boulangerie. I fantasized about living on the top floor. Yes, I would have been able to touch both sides of the apartment at the same time, and my bed would have to be placed diagonally. But I could rig a basket onto a rope pulley and send my money down and then pull a warm baguette or croissant back up through my window! And then I could eat them while admiring my view of the Eiffel Tower. How sweet would that be? 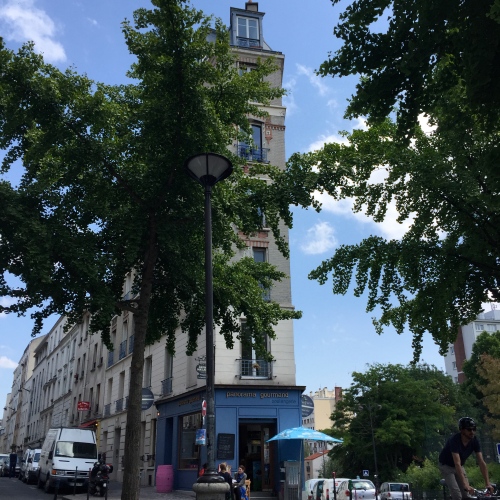 After that lunch, I had some walking to do.

I walked a long way up Rue Gambetta, which begins with this gorgeous Art Deco metro station. 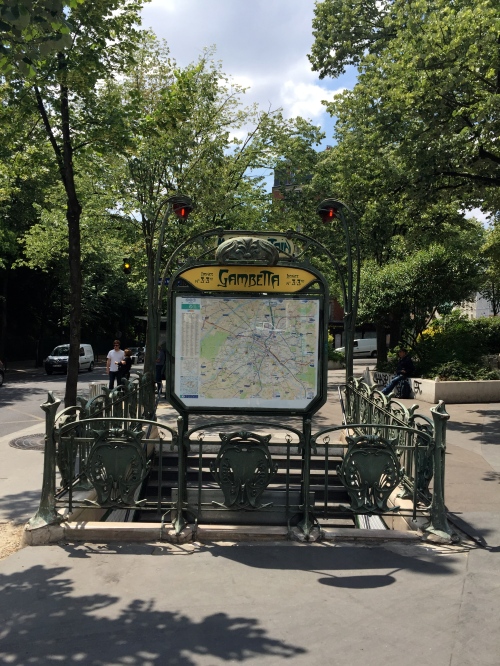 This street borders one side of the Pere Lachaise cemetery and offers a beautiful shady walk. 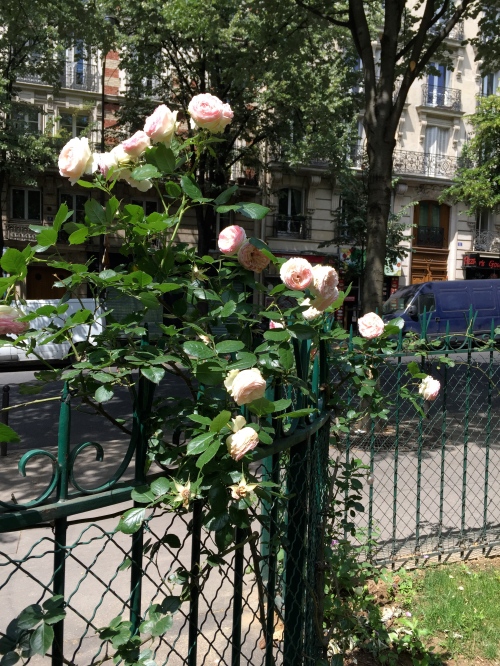 The street is also home to many elementary schools like this one. Each has a marble plaque commemorating the Jewish children who were removed from the schools and taken to camps with the cooperation of the Vichy government. It is difficult to visualize those scenes, how terrified and confused those poor children had to have been. 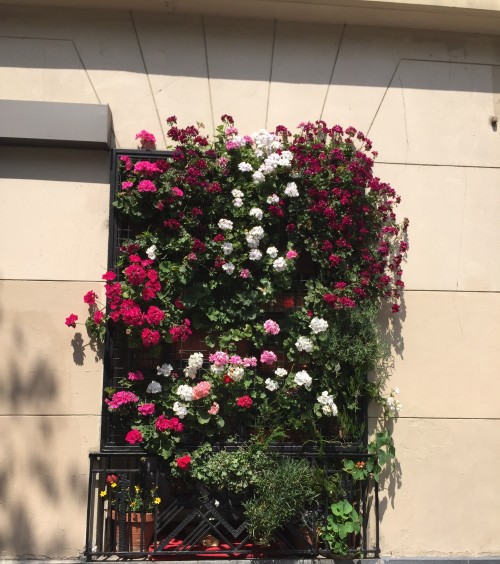 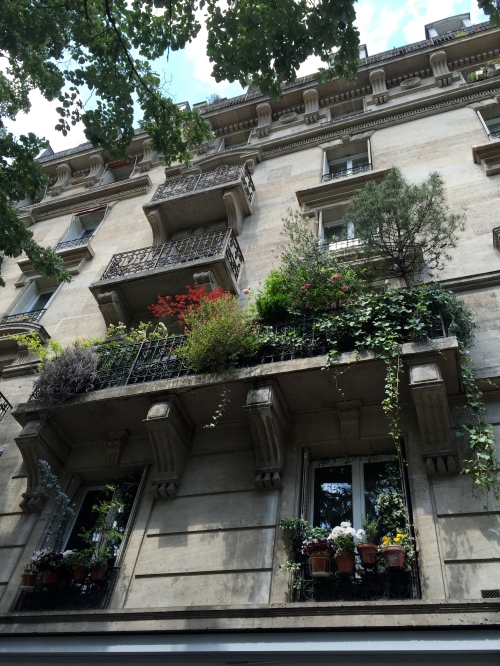 I did not go to Place Sainte-Marthe on this trip to Belleville, but one of our very favorite restaurants is found there, Le Galopin. It’s well worth a trip off the beaten path the next time you are in Paris.