I took a lot of pictures of Christmas in Paris this weekend, but I am not going to start posting Christmas until after Thursday, just on principle.  I like to focus on one holiday at a time.

The authority that manages public transportation in France is called the RATP.  I am a fan of RATP because I love the metro and the bus, and also because RATP has a website that is similar to mapquest, which I use  everyday to get where I want to go.  It tells me what form of transport will get me from point A to point B the fastest, and how to use it.  For someone with “directional dyslexia”  like myself, it is a lifesaver.

I am also a fan of RATP because I think their public message campaigns are brilliant.

One campaign for using courtesy on public transport featured animals who were being decidedly discourteous.

Many thanks to myparisblog.com, who was able to find these images on the web when I could not.
One of the busiest metro lines (line 1) has just this month become “automatic”, meaning there is no driver.  I’m still not sure what this means to me and the other riders, but RATP seemed to think it was a pretty big deal.  These funny little signs were pasted all over the line 1 stations. 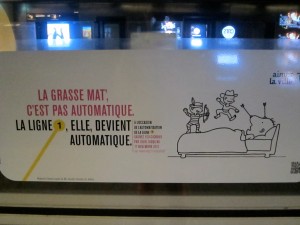 "Sleeping late is not automatic", but line 1 will be!

"Snow on Christmas is not automatic, but line 1 will be!" 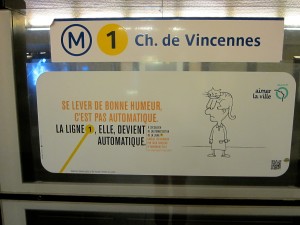 "Waking up in a good mood is not automatic, but line 1 will be!"

I’m not sure why these tickle me, but they do.  They just seem so , I don’t know—French.
To finish, Cordon Bleu’s Saturday assignment,  a St. Honore cake.  Tart crust on bottom, cream puffs, and heavenly whipped cream holding it all together.  I think she is coming along quite nicely, don’t you? 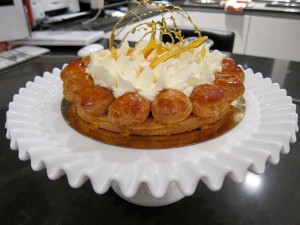 Be civil on all the lines you take, mes amies!