Baking oatmeal cookies, and other herculean tasks in the day of an ex-pat

It has been brought to my attention that my recent posts have been a bit too perky, a bit too “isn’t my life wonderful”, for some of you.  So here is an old post that I never got around to publishing, which describes a baking experience that could just as easily happen again today.  I am still flummoxed by the French butter and flour and how to use them in American recipes.  And I still wander around grocery stores totally bewildered.  It’s really not all Cordon Bleu and Costa del Sol around here, people.  Enjoy.

After the untimely demise of my Cuisinart, I decided not to risk the life of my beloved, surviving KitchenAide mixer without adding this lovely culinary accoutrement to my kitchen counter. 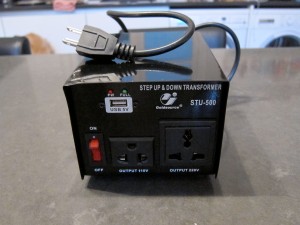 you know you want one

Isn’t it sexy?  It’s a transformer and it’s supposed to allow me to run my mixer on French current without blowing it up.  No more kitchen casualties.  Stop the carnage.

My sweet husband lugged this baby home from Houston two weeks ago and I have been eagerly awaiting my first baking opportunity.  Martha was home sick today and this afternoon we were both ready to make some oatmeal cookies from Stay At Stove Dad.  Simple enough , right?  Yeah, simple like the breadcrumb pasta  debacle.  Nothing is simple when you’re new to France, people.  NOTHING.

First, I had just used the last of our eggs for chocolate mousse.  No big deal- Saint Martha agreed to run over to the little store and pick up some eggs.  She was home 15 minutes later.  We started again.  Baking soda.  Hmmmm.  I know I brought baking powder with me because  France doesn’t  have the same kind, but had I brought soda?  That would be “no”.  Damn.  This time I grabbed the purse and ran to the store, not bothering to stop and do any research because I thought I had the soda thing covered.  I stood in front of the baking section (all three feet of it) and wondered why I couldn’t find baking soda or anything that looked like it.  I was even desperate enough that I tried to ask a young woman who was grabbing items off the shelf like it was easy–“Parlez…..” was all I got out before I realized she had music playing in her ears.  Kids.  So I stomped home to admit my total fail to Martha.  I flipped through my little “Guide to Grocery Shopping in France” and read the following: baking soda- Bicarbonate.  Found with the salt. Also found in pharmacies.  Of course.  What was I thinking?  Martha grabbed the purse and went back.  20 minutes later she was back empty-handed.  She couldn’t find the salt.  She didn’t want to ask anyone because they would have answered her in French, and then where would she be?  Back home without baking soda, I guess.  Determined not to be defeated in my very first baking endeavor, I snatched the purse and the bag of kitchen trash begging to be taken downstairs.  By the time I ran down the three flights of stairs and threw the trash in the can,  red wine had dripped on my hands  and on my white Wash U t-shirt.  Back upstairs.  Martha gives me the Camp Longhorn t-shirt  off her back and starts soaking mine in cold water.  I head back down but this time go to the pharmacy, because I need a change of scenery.  The very nicely made-up woman behind the counter gives me a look that says I really need to buff up a bit before coming in her pharmacy, and she is so right.  I look horrible.  But right then I needed baking soda, not beauty tips, and certainly not criticism.  And guess what?  She gave me baking soda- after I wrote it out for her because she couldn’t understand me. I was asking for “biocarbonate” instead of “bicarbonate”.   Whatever. Finally.  I took the soda and ran. 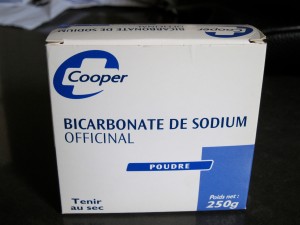 I miss my little yellow box.

We make the cookies- the dough smells and tastes incredible.  It’s only when they come out of the oven do they fail.  One big flat, greasy cookie spreads out on the sheet like an oil slick.  Tastes great, but definitely not right.  At first I think it has to be the damned soda, but now I am wondering if the rich French butter might have been the culprit.  I am going to do some research on it because I WILL make these cookies again and they WILL come out perfectly.  I refuse to be defeated by a batch of oatmeal cookies and a crazy country that sends me to the pharmacy for baking soda. 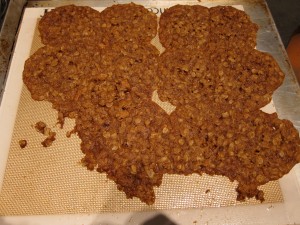 Here is the link, if you would like to try them and then gloat about how easy they were and how nice and puffy they turned out.  Go ahead- make my day.  Send pictures, while you’re at it, and I will post them to show how the cookies are supposed to look.

P.S.- As I mentioned in the intro, it really hasn’t gotten much easier.  However, I will say that those cookies, despite their pitiful appearance, were fabulous.  We ate every crumb (and they were eaten in pieces, by necessity) and quickly forgot that we had originally considered them to be a “fail”.  I added pecans to half of them, and they were particularly good.

8 responses to “Baking oatmeal cookies, and other herculean tasks in the day of an ex-pat”