My daughter and I began our journey to Memphis today.  Although it can be done in a relatively easy day of 10 hours driving time, we decided to take our time on 59.  Tonight we are cozied up in the Holiday Inn Express at Texarkana, which is on the state line between Texas and Arkansas (hence the name).    For those of you who haven’t had the privilege of visiting Texarkana, the “T” stands for “thriving”.  They said so themselves.  On a sign. On 59.  I asked the woman at the front desk if were any dinner options that were not chains or fast food, and she sent us to Cattlemans. 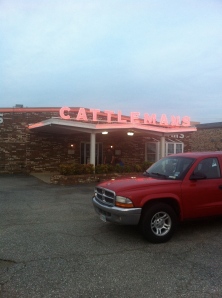 It is, not surprisingly, a steak restaurant.  However, to the left of the pictured sign was  the word “SEAFOOD”, although not glowing quite as brightly.  Obviously they were trying to cover all their bases, reassuring any non-carnivores who might be traveling through these parts that they , too, can find sustenance at Cattlemans.  Why isn’t there an apostrophe, I wonder? I should have asked that nice hostess- I’m sure she would have known.  Anyway, much to my surprise, there was no challenge anywhere on the menu or in the restaurant  for Bubba to eat a 64 ounce steak and get it free. 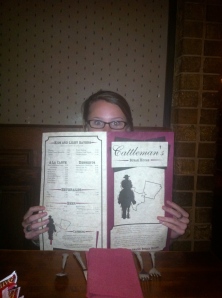 I was kind of disappointed,not because either of us were that hungry, but because it would have made a good photo for this post.  What they DID have, however, were little plastic packets of sour cream, and these little gems, presumably for the baked potatoes, which arrived on the plate totally bare neked. 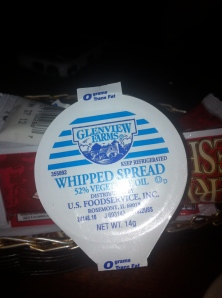 Excuse me, ma’am, but do you happen to have this whipped spread with smoked salt crystals in it?

Yes, Toto, we are definitely not in Paris anymore.

The scenery between Houston and Texarkana improves drastically as one approaches Thriving Texarkana.  The first half of the trip is pretty pathetic – scattered trailer homes, Bar-B-Q shacks, and rolling green lumps on the side of the highway that used to be trees but now are big mounds of kudzu.  I was disappointed to have missed photos of BOTH signs for  “El Dorado Resturant”.  Maybe on the way home?  Things get a lot prettier around Marshall, and by Texarkana the countryside is downright Thriving.

Today was  an interesting day for talk radio shows, because it was the day Obama announced that he now approves of same-sex marriage (again), following an “evolution”, or revelation or a serious chat with his campaign advisors.  Whatever his motivation, the announcement prompted a flurry of opinions on the radio waves.  By far the most memorable was the caller, and I’m so sorry I cannot remember where he was from, who was incensed that this latest development was going to lead to an “all- gay military”, where we will send our children to serve our country and they will turn homosexual and be sodomized. Oh yes- I swear he said that.  I couldn’t make that up on my best day.   I didn’t know whether to laugh or cry at this poor caller, but I chose to laugh-loudly.  This woke up my daughter, whose look told me that I had just confirmed her fears that I was still as weird as when she left me last August.  Anyway, I don’t mean to imply that all arguments against gay marriage are as ridiculous as that misguided soul’s. I’m not interested in using my little blog as a platform for my position on this hot button topic.  Although it would probably give me a big spike in comments….hmmmmm…..no, I’m not that desperate for comments.   I just wanted to make the point that -well– what was my point?  I guess it was that my drive was not boring, even when my daughter slept and there weren’t any billboards to keep me entertained.

It’s so hard to believe that four years have passed since I drove this road home, alone, after leaving my first-born at Rhodes College.  I remember checking my cell phone every few minutes, hoping for a text from him that would reassure me that he was going to be just fine.  I’m not sure I ever got that text, but he was just fine, and eventually I was able to put the cell phone down.  Today I drove by the Dairy Queen in Diboll where I sat at a sticky formica table and cried on the phone to my mom about how hard it was leaving my son in Memphis.  I thought about popping back in there today, just to reassure them all that I was fine.  I’m pretty sure they have been worried about me.  And speaking of Diboll, does anyone know how to pronounce it?  Does it rhyme with “dribble” or “high ball”? Or is like “De Paul” but “De Boll”?  My daughter and I pondered that as we drove by, but weren’t curious enough to stop and ask a local.  So please call in now if you know the answer.

And so tomorrow we drive the rest of the way and by evening, all of our family will be together again.  Finally.  It has been way too long.  If you’re really lucky I will post a picture commemorating the occasion.   But if I don’t get the chance to pop back on here, I with you all a very Happy Mother’s Day in the US, and a good weekend wherever you are.