Lets Go To The Riviera!

Our weekend in Nice was a delightful get-away .  We left Friday afternoon, flew for an hour and ten minutes, and voila- we were in the city of Nice, which felt worlds away from Paris.

Nice is very much a beachy resort town, but with none of the tackiness that too often dresses such places.  The oldest hotel, Hotel Negresco, was built in the early 1900’s, and much of the city reminded me of that era.  It was elegant without stuffiness, and reflected its proximity to Italy in an appealing Mediterranean flair.

Our hotel had a nice rooftop bar, serving up this view of the water. 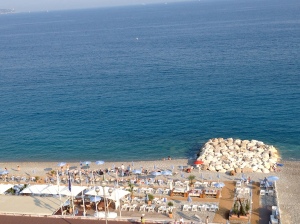 After a “welcome to Nice” cocktail, we walked along this promenade into Old Town Nice, about 45 minutes.

Along the way we passed private beach areas where one could rent a chair and umbrella and enjoy food and drink service.  I love the timeless look of these places- they really could be straight out of the 1950’s. 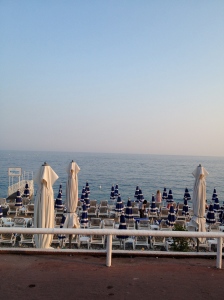 After a delicious feast of seafood, we walked around the city and enjoyed its energy.  Everyone seemed happy to be there.  And who could blame them? 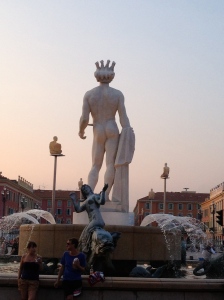 All these guys got lit up as the night got darker. 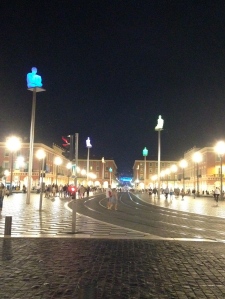 The next morning we were picked up early for a four-hour van tour up the coast to the cliff village of Eze and the microcosm of wealth, Monte Carlo.  See if you can tell which is which. 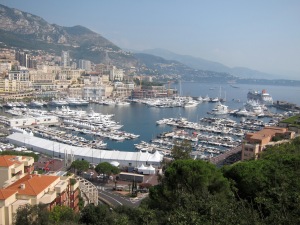 Saturday afternoon we ate lunch on the beach and then collapsed in beach chairs and hardly moved for several hours.  We did venture into the Mediterranean, which was a lot colder than it looked!  The water was gorgeous- perfectly clear down to the smooth rocks on the bottom.  The temperature didn’t seem to bother the French and Italian people around us, who were luxuriating in the water as if it were a thermal bath.  I don’t know how they did it.

And that was our weekend on the Riviera.  I hope you enjoyed your tour!  I will put more pictures on Mais Oui Paris Facebook page, if you need more eye candy!

10 responses to “Lets Go To The Riviera!”