So You Want To Be A Model? 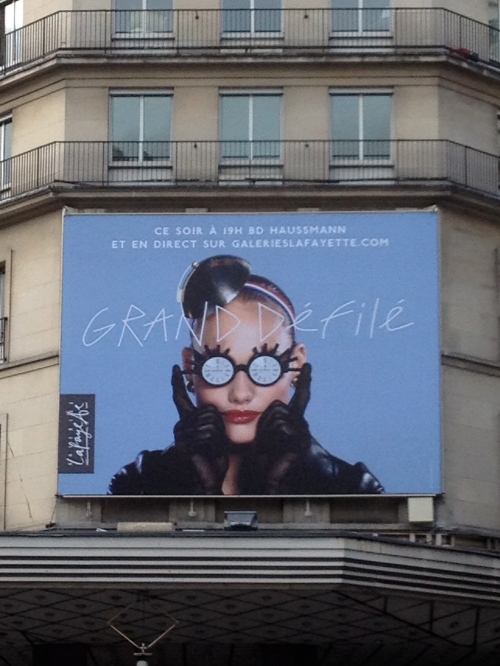 Several weeks ago the Paris department store Galeries Lafayette held its annual  “World’s Largest Fashion Show” and this year I actually made the effort to go watch.  And it really was an effort, as I had spent the afternoon on a walking tour and really wanted to go put on my fuzzy Ugg slippers and drink  a cup of tea.  Instead, I walked (some more) from the tour’s ending point to the site of the fashion show, which was on the street in front of Galeries Lafayette.  AND I had to arrive an hour before the 7:00 PM starting time if I wanted to have a decent view of the runway.  Notice I didn’t say “if I wanted to get a good seat for the show”- no seats for this event, unless you were one of the invited guests sitting in the bleachers that lined the catwalk before it came into view of us (standing) commoners.  Fortunately, it wasn’t too hot or too cold, and the rain that had threatened earlier in the day did not appear.

Coincidentally, I was in the same neighborhood that morning, because I met a friend for lunch under the gorgeous dome of another department store on the street, Printemps.  While there I watched them setting up for the show. 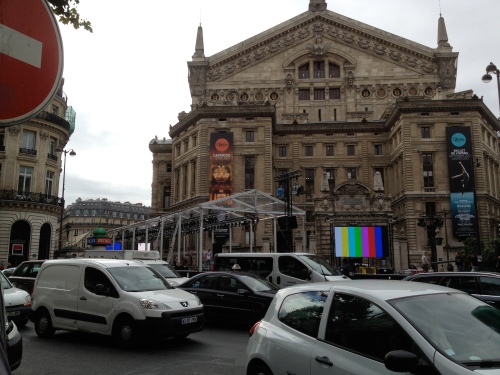 That gorgeous building is the Garnier Opera House, which is directly across the street from Galeries Lafayette.   The bleachers were set up under the covered area, alongside the catwalk, which then continued out in the open, where the crowd gathered .Does this help? 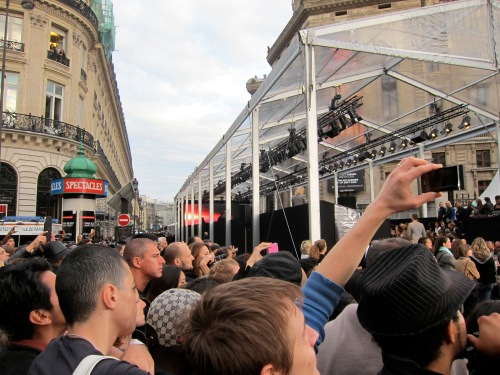 We couldn’t see the models until they passed through the black bleachers and came out into the open area of the catwalk. But we could see them on the screen while they were still in the covered area.

The  interesting thing about this fashion show is that the models were  just ordinary people who auditioned for the show, wearing their own clothes.  If they were selected, they wore the same outfit in the show, and spent the day of the show learning how to “work it” on the catwalk, as well as getting their hair and make-up done.  How fun would that be?

I have to apologize for the quality of my pictures.  There was a huge light shining right at me, as well as many heads in front of me.  You will see what I mean.

Here is one of the first models of the show.  I was standing directly in front of the large screen and could watch the models on the screen before they got to the end of the covered walkway, when they became visible to those of us standing and watching. 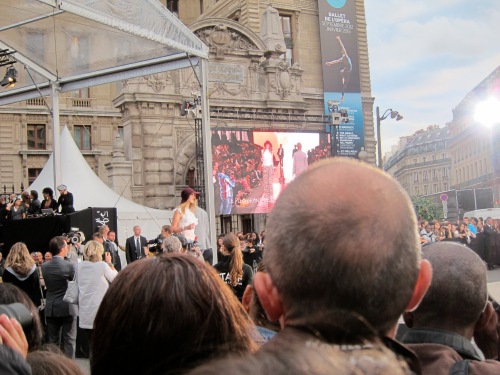 Sorry about the big bald head. I guess he got there more than an hour early.

I have a lot of photos, some of which are better than others, but none are great.  I”ll just put them up in no particular order, and you can click on them if you want to enlarge them. 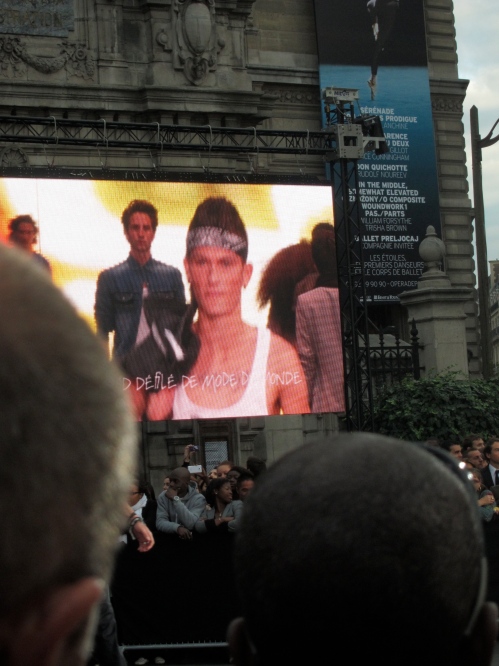 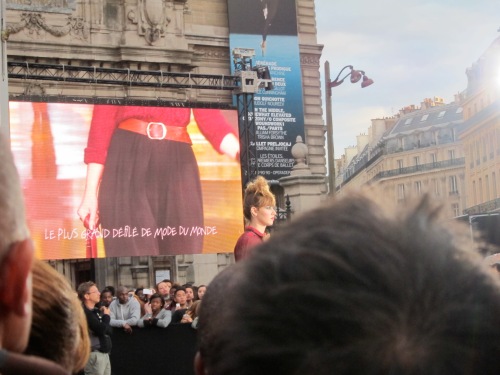 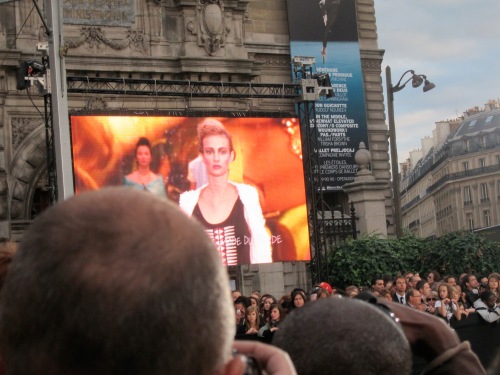 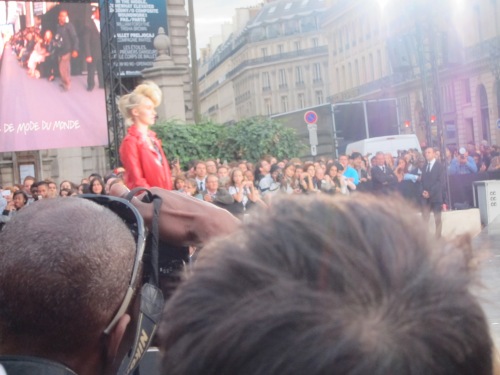 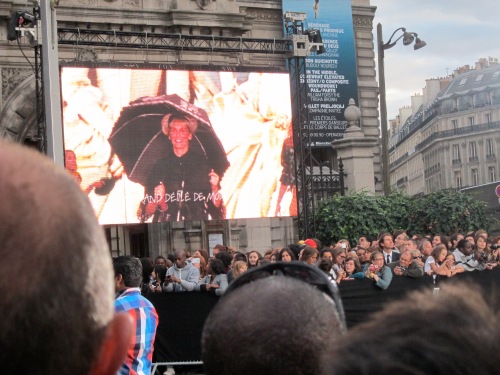 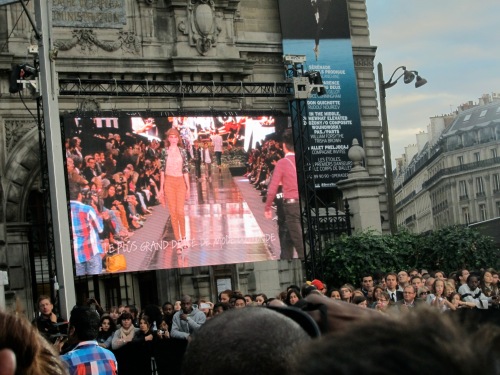 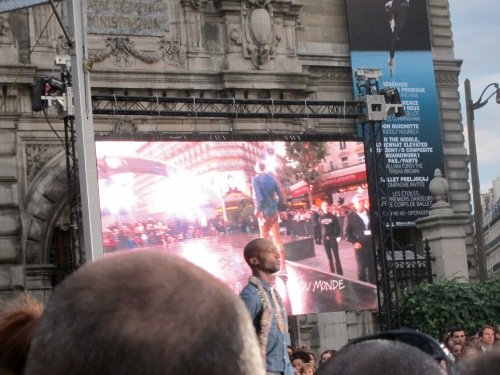 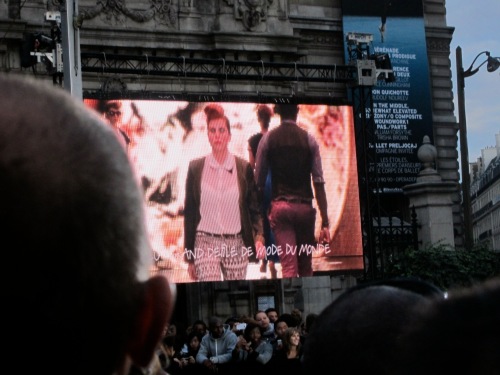 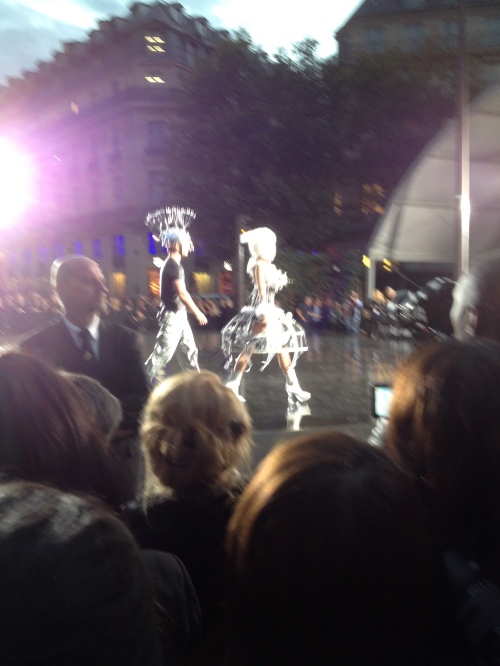 These were the final models of the evening.

At the end of the show, the hair stylists came out and used up the last of their hair spray. 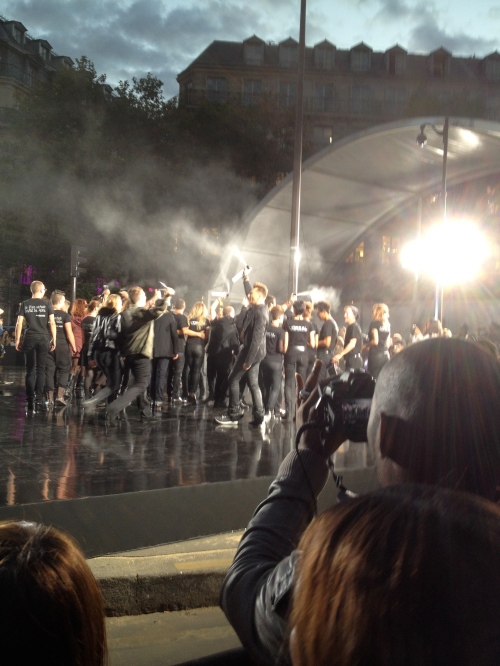 Here are some models reveling in their final moments of fabulosity after the show. 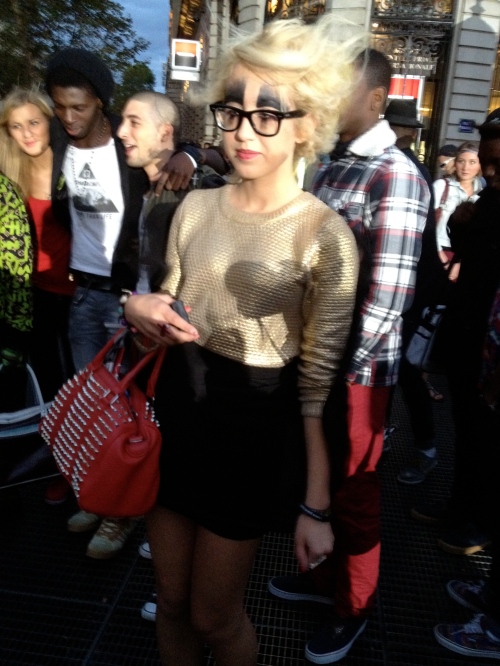 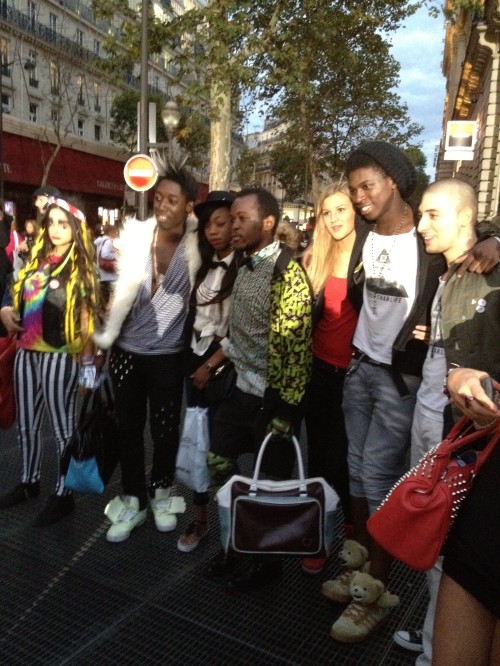 When  I turned around to leave my little spot on the sidewalk, my legs were so stiff I could hardly move them.  Such is the pain I endure to share a little bit of my Parisian life with you guys!

After the show I met a friend for a late dinner on the other side of the Opera House.  Here is what it looked like when we finished. 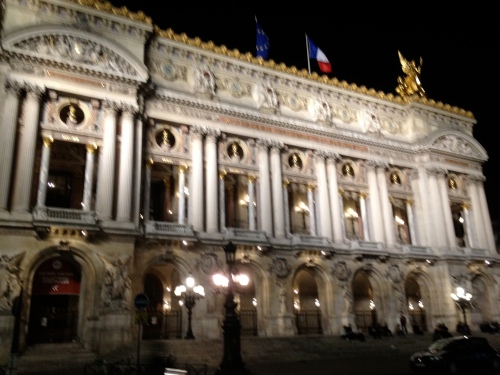 I do apologize for the poor quality of most of the pictures in this post, but as I said, I was operating at a disadvantage.  My blogger friend at Out and About In Paris, however, had the good fortune to spend the entire day with the models, and her photos are fabulous.  You can see her post about the event here.

Keep it fabulous, my fashionistas!