While waiting for our food to be handed to us at El Nopal the other night, I became enamored of another restaurant practically next door called Le Robinet D’Or.  Take a look at the sign that hangs out over the sidewalk near Canal St. Martin. 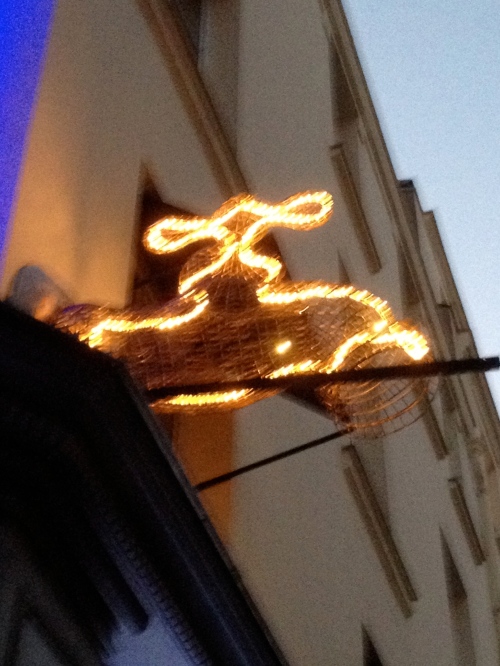 Isn’t that the coolest?  And I think it’s even cooler now that I have looked up the place on the internet and found that it is the site of an old faucet factory!  The name translates as The Golden Faucet.  OK, it  also translates (by Google Translate) as The Golden Cock, but I think we can all agree from the sign that the first translation is more apropos in this case.  There is also an interior wall decorated with faucet art, which I couldn’t photograph from the street, but saw on Yelp.

The place just opened in May- I hope it is doing well.  I should go give it a try, in  support of such creativity.  But I’m not sure I can be that close to tacos and hot sauce and not eat that instead.  Maybe I could just pick up a little tub of that liquid fire from El Nopal and pour it on whatever they are serving at Le Robinet D’Or.  Yeah- that’s definitely the ticket.  So glad I got that figured out.