As much as I (responsibly) enjoy my (occasional) wine, beer, and frozen concoction, champagne is my true love.  Which is yet another reason why I was meant to live in France.   The French understand that there is absolutely no need to wait for a celebration before popping the cork on a bottle of bubbly.  Champagne IS the celebration!  In addition to knowing how to enjoy champagne as it was meant to be enjoyed, the French know how to make the stuff- and they do it a short train ride away from Paris.  Let’s go to Reims!

We arrived in Reims on a Saturday morning, just 45 minutes after we boarded our fast train in Paris.  Why do the train rides always seem too short?  Our first stop was the market, because they tend to shut down around noon.  What a surprise it was!  We were fortunate enough to be there the very month that the newly- renovated covered market re-opened.  It was very cool. First, the history.  Reims was 80% destroyed in the First World War, so in the 1920’s there was a burst of new construction, financed heavily by Americans.  This market was built in 1929 in the Art Deco style of the times.  In 1989 the building was closed and slated for demolition, following deterioration of the concrete vaulted ceiling.  However, in 1990 it was declared a Historic Monument , and was restored from 2008 until its reopening this year.

inside view of market dome 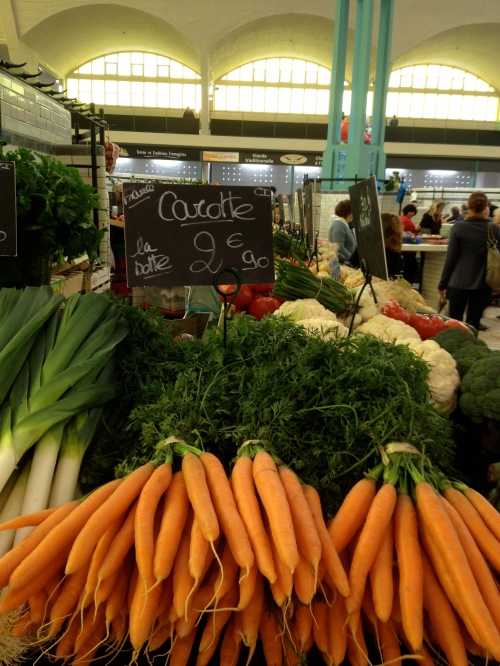 Upstairs there was a fabulous viewing gallery, which allowed me to get these nice shots from above. 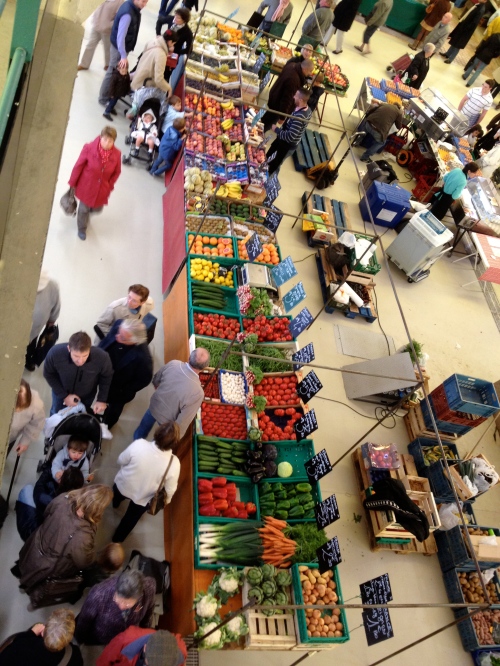 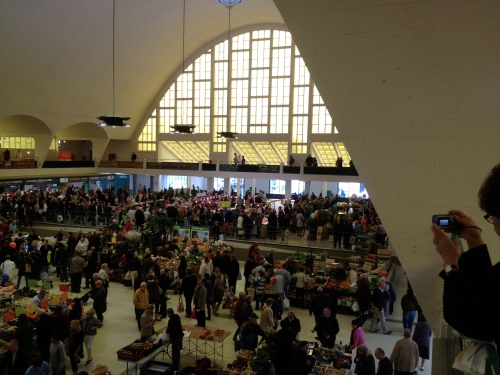 Reims has its own Notre Dame Cathedral, and it was almost as impressive as the one here in Paris.  The Reims cathedral was started in 1211 on the same site where Clovis (the first king of the Franks) was baptized in A.D. 496.  Since Clovis’ baptism, the cathedral has seen the coronation of 25 French kings and queens.  It was almost completely re-built after the destruction of World War I, (financed largely by John D. Rockefeller) and finished just at the beginning of World War II.  The cathedral is revered for its stunning Gothic style and impressive stained glass windows, including a set by Marc Chagall. 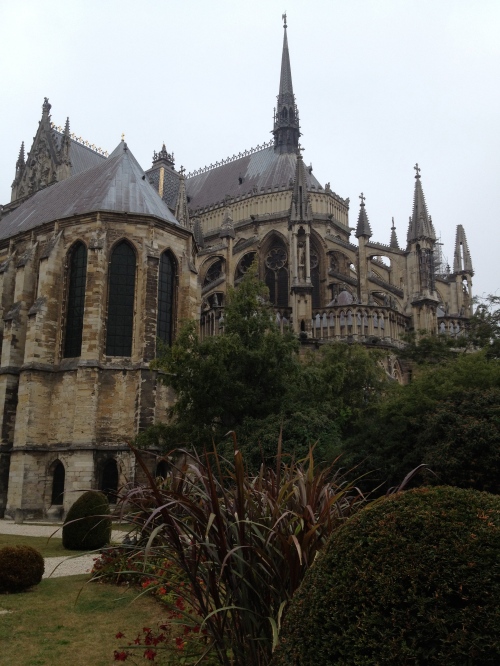 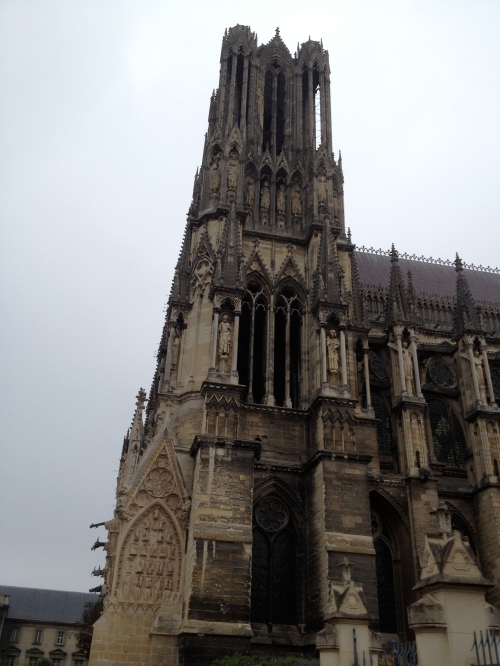 We were treated to a rehearsal of a (primarily) children’s choir.

After a gourmet lunch, we walked to the Taittinger champagne house and took a very interesting tour down into the chalk caves where the bottles are kept.  As we descended the many steps to the different levels of caves, the temperature dropped significantly.  We even saw ancient graffiti on the walls of the caves, left by the poor Romans who had to dig them out by hand. 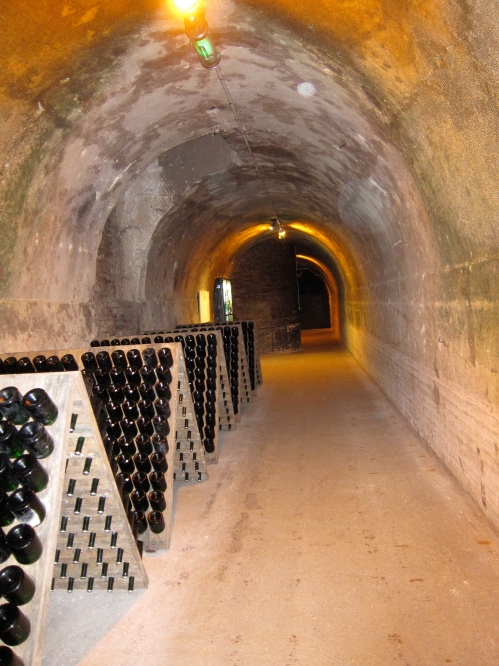 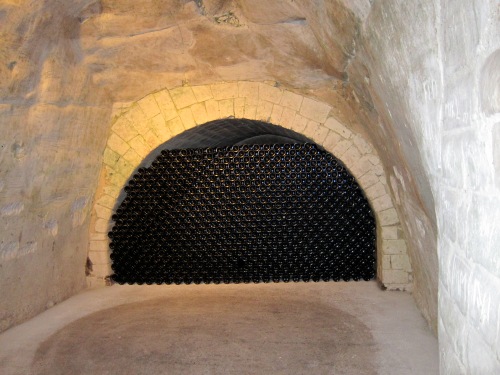 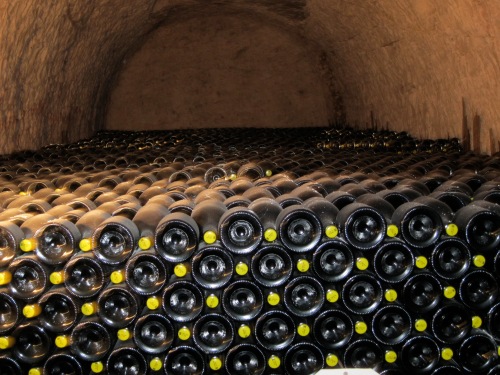 Of course, the grand finale was a tasting of the house specialty.  (Hint: if your husband tells you to pour the rest of your champagne in his glass and then go score another glass, don’t do it.  There might not be any more glasses for the taking.)

I got my eye on you, lady. NObody gets a second glass on my watch.

The good news was that since we were limited to one glass of champagne, we were in fine form to tour the St. Remi Basilica and the Saint-Remi Museum, housed in the old abbey associated with the basilica. 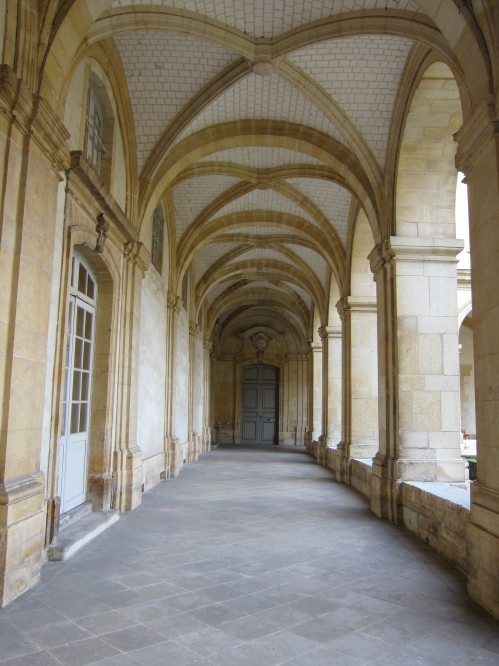 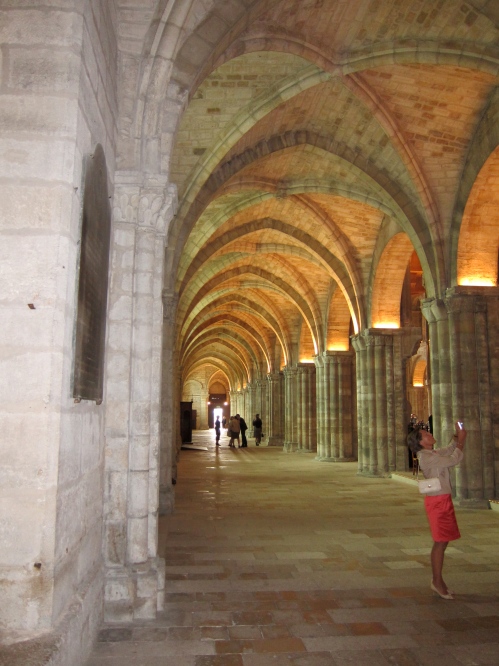 I didn’t take any pictures of the basilica because there was a wedding in progress.  I did mingle with the wedding guests when they exited the church, because I wanted to show you the hats.

Is that a paper plate stuck to the side of her head? And how does it stay there?

So after all the wedding excitement it was time to wander back to the train station, where we discovered that our return tickets were for the next morning.  Oops.  Thankfully, the customer service was better than we usually find here in France, and we were able to get them changed to that evening.

We had time for one last drink on the “strip” in Reims, which was full of activity.

Here’s a toast to all of you- salud!  And remember- you don’t need a celebration to pop a cork of bubbly!