Vancouver to Seward Aboard the Celebrity Millennium

I know that the subject of cruises elicits strong opinions. Some love them; some loathe them. There are valid reasons for the polar reactions. I happen to be one who straddles both camps. I really like being able to change vacation spots without having to touch my bags. I love the pace and the placidity I find on cruises. I think they are a wonderful way for multi-generational groups to travel together. On the other hand, I hate their effect on the environment. I also detest disembarking and touring lovely places with thousands of my closest cruiser friends. Really- it’s just the worst way to be a tourist, isn’t it?

One of the best things about the Alaskan cruise was that the excursions were in very small groups and away from the throngs. Also, I think that cruising is a wonderful way to see the Alaskan scenery, and certainly to view the glaciers. I am certain that none of us on this family trip (well, those of us older than eleven, anyway) will ever forget the glaciers or the whales we  watched. The scenery was so breathtakingly different from anything we had ever seen before. I whole-heartedly recommend an Alaskan cruise, my friends, and the smaller the ship the better.

Some pros and cons about the Celebrity Millennium:

The Celebrity Millennium was not small, carrying 2000 passengers. The food was adequate but not great. The buffet restaurant, where we ate breakfast and lunches, needed more variety from day to day. We ate at our own table for ten at night, in a restaurant with nice service but food that was somewhat lackluster. However, one can’t really expect stellar food on a boat preparing as many meals as this one did.

The wi-fi was not included and was pricey (and slow). Surely cruises can join the ranks of hotels and airports that are providing free internet to patrons. At the very least there should be one area of the ship with free wi-fi.

The two people in our group who used the spa reported that it was not very nice, despite its automatic 18% gratuity.

On the positive side, the entire ship was very clean, comfortable, and quiet. The staff was excellent. The gym was nice. The pina coladas were delicious. The cruisers were well-behaved. The naturalist on board provided good information in theater presentations and also broadcasted throughout the ship while we were viewing the Hubbard glacier.

Our boarding process in Vancouver could not have been easier or better organized. We were on the ship with minimal waiting in line.

Sadly, this is the only photo of our ship I took!

Our stateroom on the eighth deck, which was not the most nor the least expensive, was spacious and comfortable. We made good use of the balcony, as most of the rest of our gang were lined up in rooms with balconies right next to ours. 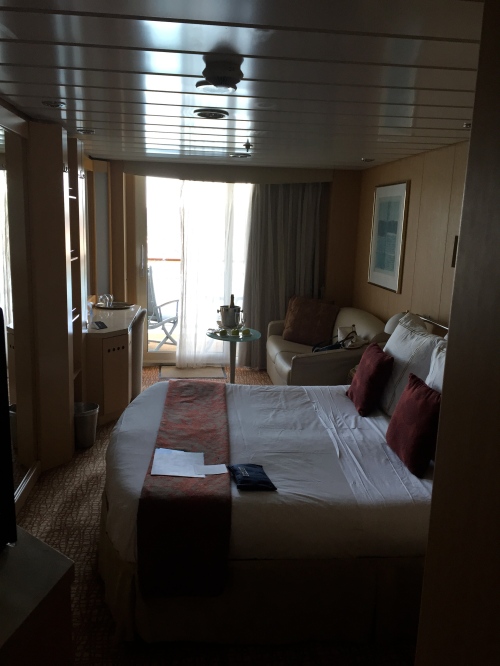 My two oldest kids flew into Vancouver on their own, met at the airport, and met us onboard not long after we boarded. Needless to say, I was much relieved to see their smiling faces on that ship! 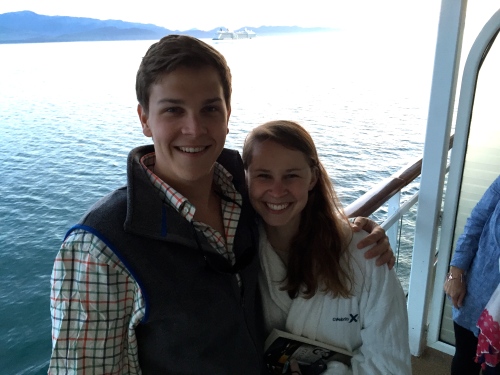 Those two kids were in a stateroom on the third deck. Their room was almost as large as ours, but with a picture window in place of a balcony door. Despite the requisite grumblings about being relegated to steerage, they admitted that the room was perfectly comfortable.

Our group of ten split up and re-grouped throughout the days and nights. We each used the gym, pools, casino, bars, and quiet reading areas as we felt moved to do, and then regrouped in the evenings. We also chose excursions according to our own interests. When planning our cruise, the choice of excursions was a bit overwhelming, but ultimately we were pretty satisfied with our selections.

Our first stop was Ketchikan, where the three men in the group went salmon fishing while we women-folk browsed the little town. The guys shot a cool video of an eagle swooping down to pluck a salmon right out of the river!

At our next stop in the Icy Straits, our large group split up into two small whale watching boats. I hate a certain two-word term that is ubiquitous these days, referring to experiences people hope to have before they die, but I will say that seeing whales was something I have always wanted to do. It was magical.

My brother-in-law got these great photos using his good camera with a lens. The whales were not this close to the boats, though with binoculars we were able to see them pretty well. 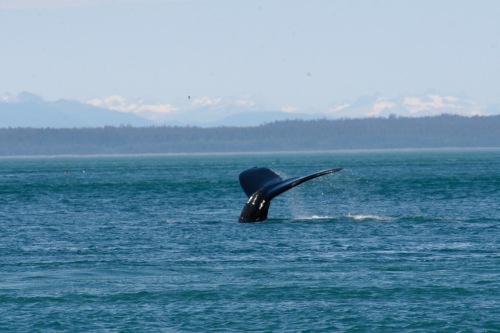 We even saw whales in the sky!

Something else I did for the first time on this cruise was ride in a helicopter! The four of us and another couple took a chopper to a glacier, where we were able to get out and walk around on the ice. The luminous blue was amazing. 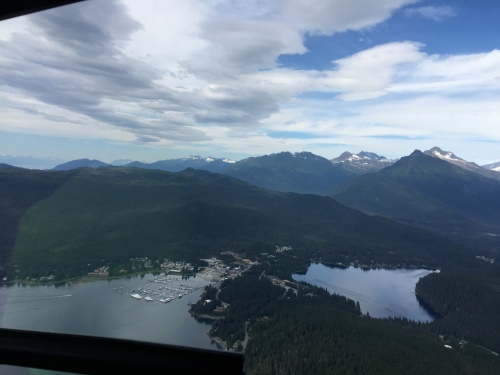 In Skagway we took a tram ride up to a beautiful viewing spot.

Don’t leave without us, please!

At our last stop in Juno we rented a jeep and drove a few hours along a gorgeous road. 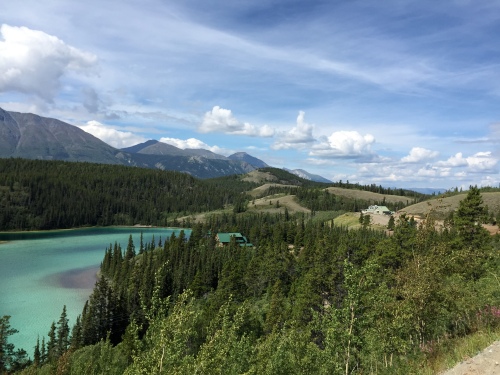 At the end of the cruise, the ship got very close to Hubbard Glacier, allowing passengers to see it and even to watch and listen to the thunder of the calving. 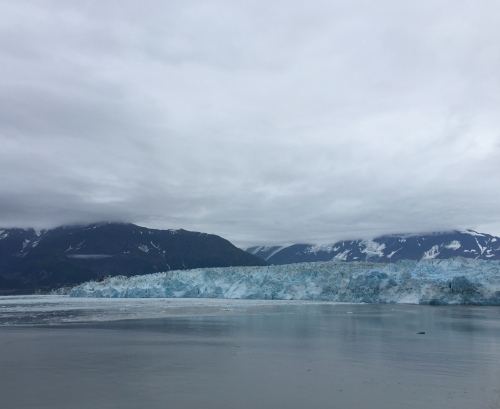 After six nights  we woke up in Seward, where the disembarking was as painless as the reverse process was at the beginning of our vacation. The ten of us loaded into a small bus that we chartered to take us to Anchorage, which was about two and a half hours away.

Even if you are “cruise-averse”, I urge you to consider an Alaskan cruise. It may be your best (and only?) shot at seeing the glaciers before they disappear. Seeing the whales, eagles, and bears (if you’re lucky) is thrilling. I would even do another one on a much smaller ship that could maneuver into tighter spots.

Next stop: Anchorage and the crazy amazing kids who got there by bike!