The restaurant selection in Paris can be mind-boggling. I often think to myself, as I walk by places that I would like to try, that I could eat out twice a day for the next ten years and not come close to hitting all of them. We do make an effort to try new places, but sometimes it’s nice to go back to the “tried and true”.

Several weeks ago, after out field trip to Bercy, Mark and I popped by Lazare in hopes of getting lunch without a reservation. Located in the St. Lazare train station, Lazare is a spacious and light-filled restaurant with a three-star chef, Eric Frechon. We had eaten dinner there once before but did not know whether we could get in for lunch, or even if they would be open for lunch. They were, and we did, and it was lovely. Sunday lunch is a set menu and that day it was smoked salmon and leeks vinaigrette for starters, a beef dish similar to pot roast with potatoes, and cherry clafoutis and tart tatin for dessert. 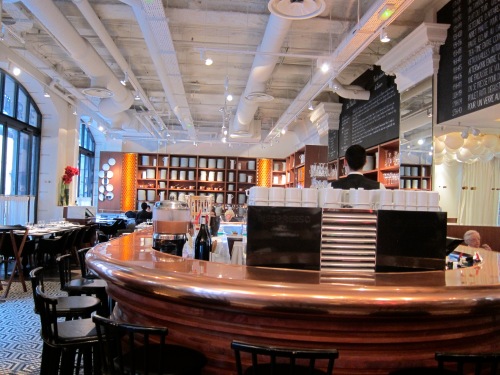 From my seat I had a bird’s-eye view into the open kitchen. 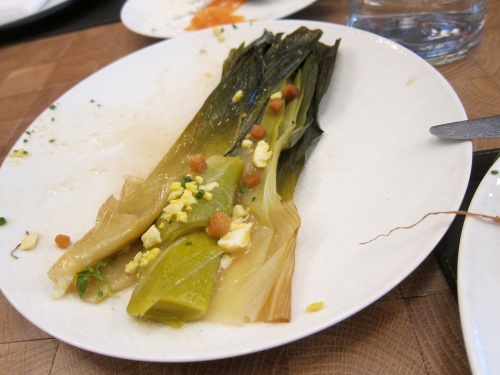 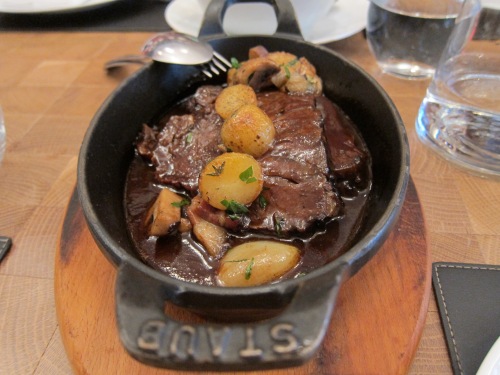 I have read complaints about the service at Lazare, and ours wasn’t terrible but wasn’t great. The worst of it was being given a bill, which we paid before realizing it was for the diners sitting to the right of us. The staff brought us the difference in cash and were apologetic, but the mistake was symptomatic of the disorganized service that afternoon. We went home full and happy, though, and pleased with ourselves for a delicious and spontaneous choice for lunch.

That same week we took Martha and her friends to our old stand-by, Les Papilles, which I have written about here more than once. The last time we were there was in the summer and we nearly disappeared under our table in a puddle of sweat. This evening, though, was cold, and we sat at our favorite round table by the window, which we opened a few times for a cool down.

As always at Les Papilles, the fixed menu was an amazing soup, a roasted meat and vegetable, and a frozen panna cotta. The first two courses are served family style.

Sad to say the panna cotta didn’t stick around long enough for a photo. It was covered in toasted pistachios, and was delicious, as always.

Les Papilles is always relaxed and fun and the food is consistently good. Just don’t go there in the summer. Ever. Even a cold soup didn’t save us.