A Night of Champagne and Shoes

When my friend Mary Kay (Out And About In Paris) and I were trying to schedule a time to get together during my week in Paris, she suggested lunch or coffee one day, and then mentioned that she also had an invitation to an evening cocktail party at the shoe boutique of Roger Vivier on Rue Saint- Honore.  Not being a fashion maven, I had no clue who Roger Vivier was, but I do know a few things about cocktails and shoes, and I quickly jumped on that invitation before she had time to reconsider.  Mama didn’t raise no fool.

We began our evening at the lovely Mandarin Oriental Hotel, also on Rue Saint- Honore, which was promoting its new “pop-up” champagne bar.  The bar is temporarily in the glass-enclosed courtyard of the hotel while its rooftop bar is undergoing renovation, and only serves champagne and champagne cocktails.  That was not a problem for us.  Like at all.

I ordered a peach bellini and Mary Kay tried a cocktail with honey in it.

My bellini had little balls of peach goodness in it, and also was embellished with pretty gold flecks floating in the bubbles. 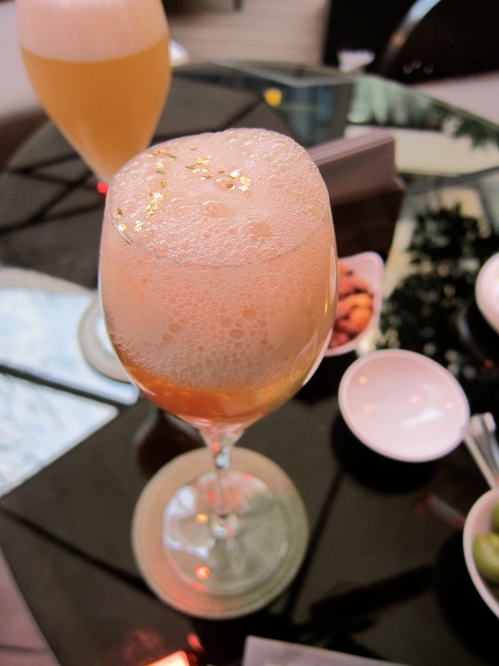 Yes, the flecks were pretty, but they had an annoying way of sticking to my lips.  Just in case you were already thinking of adding gold flecks to your champagne offerings at home.  You might want to think again.

After our bubbly (sadly, we could only afford one each) we had a short walk down the oh so fashionable street to Roger Vivier, which was festooned with lovely white paper roses. 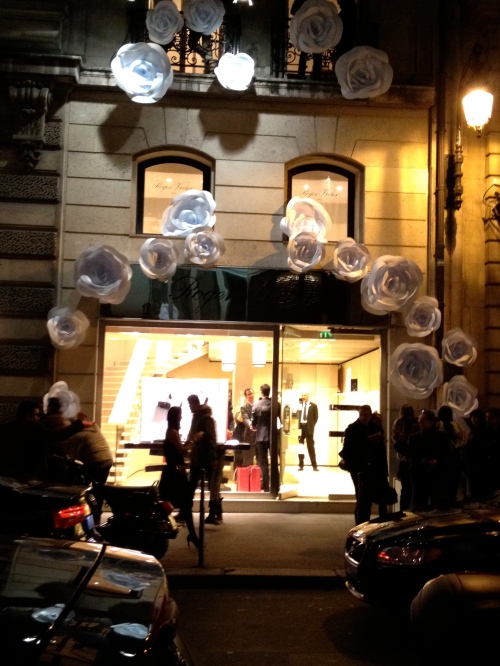 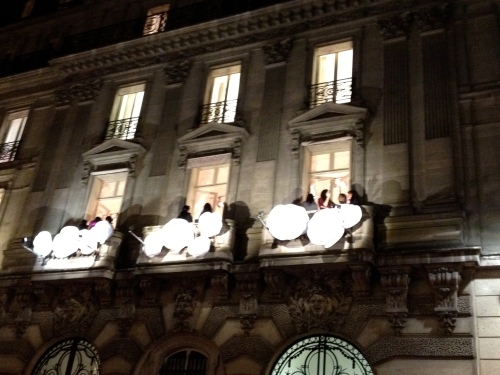 This party was to celebrate the  publication of a lovely book, Roger Vivier, which goes on sale in April.  I’m sure the fact that the party coincided with Fashion Week was no accident.  I saw several faces that I had seen earlier that day at the fashion shows. 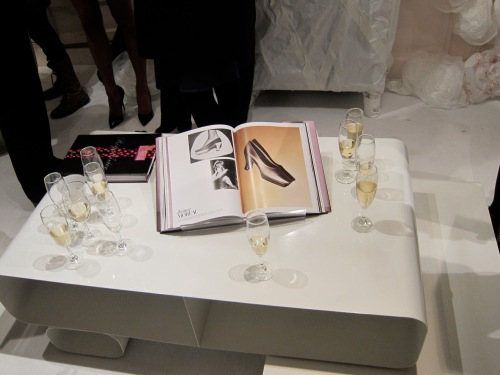 I love things made from folded and cut-out paper, and the paper roses were only the beginning of the charming paper decorations at this party.

In addition to the paper decorations, the guests provided more eye-candy with their style and, of course, their shoes.  Oh, their shoes.

But perhaps my favorite pair of shoes was worn by this woman, the gorgeous and much adored (in France) Ines de la Fressange.  A model and a designer and author of the widely popular Parisian Chic, Ines is also an ambassador for the Roger Vivier brand of shoes.  She is just as beautiful up close as she is on magazine covers.  And did I mention that she is 56?  Yeah. 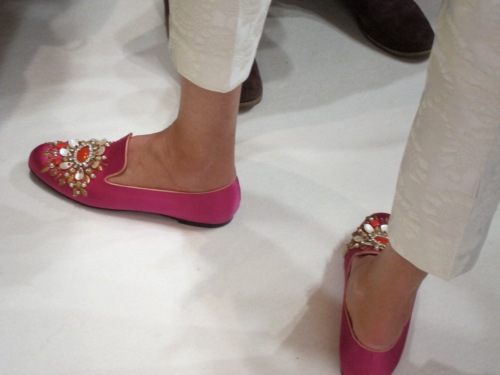 Yes, it was a very fun evening, and so different from the way I usually spend my nights in Paris (which may or may not involve pajamas and Apple TV by 8:00).  Once again I am thankful for the friendships I have made through blogging, including Mary Kay and the effervescent Sylvia of Finding Noon, who provided the magic ticket to the Roger Vivier soiree.  Merci, Sylvia!

And as always, I am thankful for my faithful readers!  Thanks for sticking around these parts.

P.S.- I forgot to mention that Catherine Deneuve was at the party before we got there!  I travel in such glamorous circles, don’t I?

16 responses to “A Night of Champagne and Shoes”